Your browser is not supported. For the best experience, you should upgrade to a modern browser with improved speed and security.
Click here for information on new branch procedures as a result of COVID-19 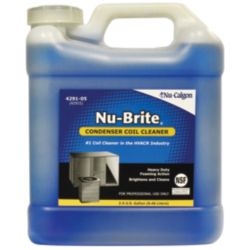 Nu-Calgon - PanPad is made up of a quaternary-based biocide, formulated in tablet form and enclosed in a plastic housing which in turn is sealed ultrasonically to an absorbent white filter pad. Water is absorbed by the pad and "wicked" to the tablet, resulting in the immediate, but controlled, release of the powerful biocide. PanPads can be used in any condensate pan arrangements, either horizontally or vertically. It's low profile fits most pan configurations. Formulated buffering agents help protect pan against corrosion. When used as part of the Clean Coil Program, equipment is assured of optimum performance at the lowest possible energy cost.

Air conditioning and refrigeration evaporator or cooling coils cool the air that is brought across them. In the process, moisture can be removed from the air, resulting in condensate. This condensate is collected in the condensate pan and drained away. Without proper treatment, bacteria can begin to grow in the pan, clogging the drain hole and resulting in overflow. In addition, this bacteria can also cause musty odors as well as respiratory ailments, contributing to an indoor air quality (IAQ) problem. Use of PanPads kills this bacteria, preventing these problems.